Will You Be Watching The First Presidential Debate?

Regardless of how you feel about either of the major party presidential nominees, you have to say that things have certainly gotten very interesting.

Speaking of which, the first presidential debate will be held Monday, September 26, at Hofstra University, Hempstead, NY (my alma mater!), and you can guarantee that a whole lot of people will be tuning in to watch. 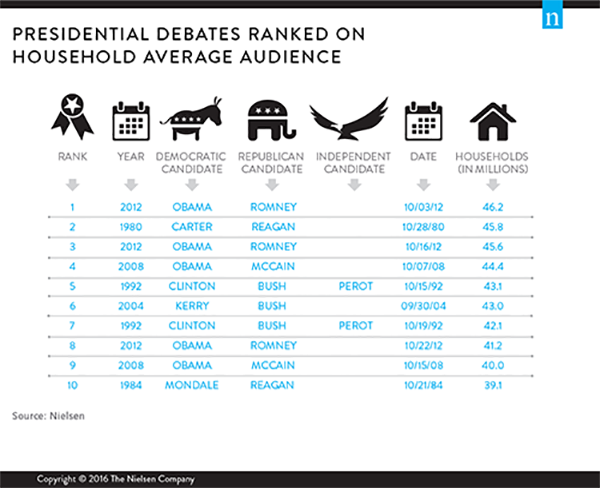 According to Nielsen, six of the top 10 debates by household viewership numbers occurred within one of the last three election years. Of those six, President Barack Obama has appeared in five of them—and the initial debate of the 2012 election, featuring him against Mitt Romney, currently holds the top spot.

Until the 2012 election, the top spot once belonged to the historic 1980 debate between Jimmy Carter and Ronald Reagan. At 45.8 million households, the lone presidential debate of the 1980 election maintained the top spot for nearly 32 years, according to Nielsen.

Let’s see if this year’s debates break the record!