Well, it’s now “officially” BBQ season! Our family had our first BBQ on Memorial Day, and it was fantastic! If you also had or attended a BBQ this past weekend, I hope you enjoyed some tasty treats.

Unless you’re a vegan or vegetarian, meat is surely going to be on your BBQ menu. During the summer months, sales of certain BBQ-able (yes, I think I just made the word up!) meats go up.

In fact, beef, franks and dinner sausage marked above-average sales from Memorial Day through the week of the Fourth of July in 2015, according to the Nielsen Company. Still while hot dogs are an easy go-to choice for grilling, ground beef, pork and chicken were the most popular by total dollars sold for Memorial Day 2015. 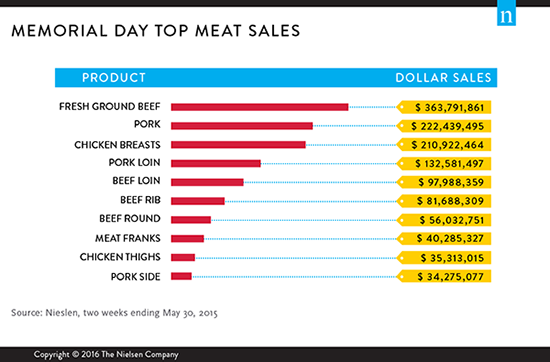 While meat isn’t always thought of as being especially healthy, it is typically loaded with protein. Protein claims on packaging are driving sales growth in a number of different product categories. For example, while overall frozen entrée sales declined, sales of frozen entree items that list “protein” as a claim on the package actually grew by 20% in 2015, according to Nielsen.

When you go shopping for meat, you’ll be sure to see more items promoting protein, since many consumers may not be aware of just how much protein is in some meat. For example, in a recent NCP survey less than 40% of consumers realized that pork and chicken each contain more than 20 grams of protein for just three ounces of meat.

Now for those of you who are not into eating meat, don’t forget you can also grill vegetables and even certain fruits.

So whether you BBQ meat and/or vegetables and fruits, make sure to light up your grill and get cooking!

Send Us Your Thanksgiving Recipes!